Five days after my post regarding why Azerbaijan should not amend its state budget, the government announced the 2022 budget amendments. With this post, I will look at what changed and share my opinion.

The statement provided by the Ministry of Finance first gives an overall outlook of the macroeconomic climate for the first half of 2022. Of course, the picture looks excellent thanks to hiking oil prices. GDP growth is at 7.2%, trade surplus at 8.8 billion USD, and budget surplus at 1.2 billion AZN during the first four months of the year (when this document was released).

The government estimates that by the end of 2022, the oil revenues of the state budget will be 2,040 million AZN more, and non-oil revenues will be 1,534 million AZN more than expected. Be minded that the rise in oil revenues comes primarily from taxation and excludes the State Oil Fund (SOFAZ) transfers, which are constant regardless of the variation in oil prices unless specifically amended by the parliament. Out of that extra 3,574 million (oil + non-oil revenues), the government plans to spend 2,382 million AZN. The remaining 1,193 million AZN will replace the equal amount of transfer from SOFAZ. This means that the total transfers from SOFAZ to the state budget will be reduced from 12.7 billion to 11.5 billion AZN.

With all honesty, the amendments to the revenues surprised me the most. I was relieved to learn that the transfers are not boosted, but in fact, are set to shrink. Before the amendments, direct transfers from the State Oil Fund constituted 47.4% of total revenues, whereas this indicator is now brought down to 39.4%[1], making it the lowest indicator since 2009 except for 2017 (by all means, 2017 was a true anomaly for Azerbaijan’s budgetary policymaking where the government pursued a strong and short-lived fiscal consolidation policy and consequently the transfers accounted for only 36.9% of revenues). This is a valuable development, as the State Oil Fund will acquire significant assets (assuming that those gains are not driven back by losses on investments, which seems likely given the situation in financial markets around the globe) from the current oil prices. Credit where it is due – Azerbaijani government is acting more cautious with rising oil prices than it did in the 2010s, at least when it comes to the transfers.

After the adjustments, the Ministry of Finance forecasts a budget deficit equaling 2.7% of GDP in 2022. Although a lower deficit would have been welcome, it is still below the 3% threshold most countries use in their fiscal rules[2]. The Ministry of Finance has previously argued that the larger-than-usual budget deficit in Azerbaijan serves to develop the internal financing market. If that is indeed the case, then there can be some virtue in the 2.7% budget deficit.

Following the amendments, the share of oil revenues will decrease from the previous 54.8% to 53.2%. As mentioned above, this decline is primarily driven by lower transfers but is largely compensated by higher revenues from non-transfer oil sources.

With the amendments, the total expenditures of the state budget are set to reach 32.2 billion from its previous 29.9 billion AZN (an 8.1% boost). Not only this is the largest budget in Azerbaijan’s history, but also it is 17% more than the executed budget of the previous year. Such a serious rise in budget expenditures raises many potential economic problems and could be a contributing factor to dangerously high levels of inflation currently observed in the country. It is also, as I mentioned in my previous post, a prime example of pro-cyclical fiscal policy, as you can see from the graph below. 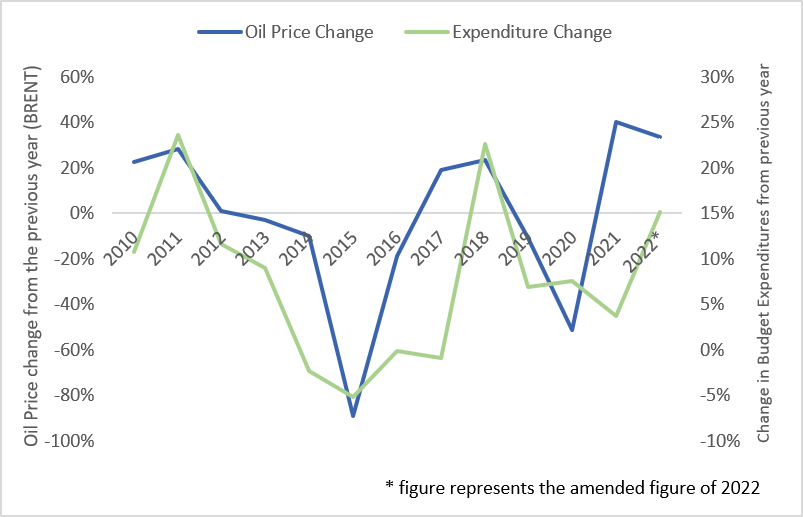 You can see what was altered with the amendments on the table below.

Table 1: Overview of the changes in the expenditures (largest to smallest)

The primary drivers of the rise in “economic activities” expenditure category are “fixed capital investment” (496 million AZN more) and “reconstruction of the liberated lands” (470 million AZN). The rest of the upturn belongs to the subcategory of “other activities” (194 million AZN). 163 million AZN of that extra spending will go to “Azerbaijan Business Development Fund (ABDF)”. Interestingly, when I googled ABDF in Azerbaijani, the only results are about the Fund’s creation by President’s decree in October of 2021. The decree mentions that the new ABDF will replace the existing “Entrepreneurship Development Support Fund”, but the latter is still operating as usual, despite almost one year passing since the decree.

The rise in defense expenditures is not explained in detail, for understandable reasons.

“Expenditures not belonging above” is another thought-provoking category. Its rise stems from increases in two subcategories: “Defined purposeful budgetary fund” (352 million AZN) and “Other activities” (194.4 million AZN). The first (“defined purposeful budgetary fund”) is the Automobile Roads budgetary fund, which belongs to “Azerbaijan Automobile Roads State Agency”. Its expansion most likely is related to the building of new roads in the liberated territories. The rise in the second subcategory of “other activities”, like that of “economic activities”, is a mystery. I have tried to dig it further from other documents and statements released by the Ministry and found out that it belongs to “Financing of security, socio-economic and other activities” (1.12.4.4.11). This subcategory’s funding was increased from the previous 227 million to 420 million AZN. It is unfortunately not possible to learn more about this hefty spending from public sources, which is a massive shortcoming of Azerbaijan’s budgetary oversight.

The first three expenditure categories in Table 1 are responsible for 93% of the total surge in expenditures after the amendments. The rest of the categories on the table have been raised by 0.1 – 2.4%.

Peculiarly, healthcare is the only category of the state budget that is going to receive less money after the amendments. How is that justified I do not know, as the 4-page statement by the Ministry of Finance about the amendments does not mention healthcare expenditures at all. Looking at the decree by the President and comparing it with the previous one, we see that the main part of the variation comes from decreasing “financing of socio-economic and other healthcare activities” (1.5.4.11), which went down from the previous 350 million to 264 million AZN. Once again, we hit another mysterious “other activities”.

To put it shortly, the latest budget amendments have some positive and negative changes. To start with the positive:

On the other hand:

[1] Be noted that even with the lessening transfers, the oil sector still accounts for 53.2% of the budget revenues.

[2] Azerbaijan’s budget rule has no threshold on state budget deficit. Instead, the rule sets a mid-term upper limit for the ratio of the non-oil deficit of the consolidated budget to the non-oil GDP.