The question here is not whether Azerbaijan is part of the globe or not (for obvious reasons, it is), but rather how much Azerbaijani economy is integrated into the world economy. There are some elemental facts that give us some clue, such as Azerbaijan not being a member of World Trade Organization (WTO), the largest trade organization of the globe. Yet, we would need more indicators to comprehend the situation and then compare it to neighboring countries. For that reason, I developed simple indexes in six dimensions for three countries: Azerbaijan, Georgia and Turkey. The results of indexes are presented in the table below, followed by their explanations and interpretations[1].

Trade Turnover: This is the indicator for level of foreign trade. The most straightforward way to compare these three countries would be taking the sum of their imports and exports (total trade turnover) and divide it by their respective population. As expected, Turkey, the country with a more developed manufacturing sector than the other two, is the clear leader, as it can be seen from the results. Frankly, I was expecting Azerbaijan to be the second due to its oil resources, but Georgia seems to surpass us even on that field. According to the available statistics, Georgia trades 580.9 USD per person more than Azerbaijan, despite the fact that the latter is rich with oil and gas.

Foreign Direct Investment (FDI): a country that is more integrated into the global economy tends to attract more investment, since cost of production and exporting from the country is substantially reduced if the trade is more unrestricted. Interesting results arise from the calculations: I have derived the indexes yet again by dividing FDI inflows over the population (to make it fairer). Per capita speaking, Georgia is the country that attracts the most investment, followed by Azerbaijan. Turkey’s under-performing score compared to the other two can be explained by two factors: (a) its population is 8 and 22 times larger than that of Azerbaijan and Georgia respectively and (b) the net inflows of FDI to Turkey diminished remarkably over the course of the last several years due to increased political uncertainty (Between 2015 and 2017, FDI inflows shrank by almost 40%).

Tourism and Passport Strength: More economic integration also brings free (or relatively easier) movement of people. This fact usually is usually reflected in the number of incoming tourists and number of countries that don’t require a visa to visit. Firstly, when analyzing Tourism, I have once again used per capita statistics. In this case, Georgia here minimizes both Azerbaijan and Turkey, with almost 4 and 8.5 times higher tourists per person than Turkey and Azerbaijan respectively. The liberal policies compared to the other two countries and an overall inclination towards West by Georgia has also boosted its tourism sector. Passport Strength, on the other hand is measured by the number of countries that the passport holders can visit without a visa. These particular indexes are obtained from www.passportindex.com. In this case, Turkey and Georgia (113 and 114 visa free countries respectively) both are way ahead of Azerbaijan, whose passport holders can travel to only 71 countries without a visa.

Direct Connection: Another indicator that the researchers usually check for evaluating integration is how the country is connected to the others. One way to measure is to use the number of countries that have direct flight. For that purpose, I counted the number of countries that one can fly directly from largest airports of the three countries. In this regard, Azerbaijan and Georgia are somewhat similar, with 25 and 31 direct connections from Baku and Tbilisi respectively. As you might expect, Turkey’s Ataturk International Airport is way ahead of its competitors with 98 direct connections thanks to large international airline that it hosts.

Business Cycle Correlation: In one my latest posts, I have used a basic statistical indicator called the coefficient of correlation, which effectively tells us to what degree two variables move in the same direction. Simply put, a larger coefficient tells us that the two economies tend to grow or shrink together, meaning that they are integrated at a higher level. The variables here are the quarterly GDP growth, representing Business Cycle Fluctuations. Using the same formula, I have calculated the correlation coefficients of quarterly GDP growth of Azerbaijan/Georgia/Turkey against OECD (representing the World Economy). Due to unavailability of the Georgian data, the variables range from 2012 – 2018, which gives us 25 observations. The results from coefficient correlations presented in the table above are just as expected. The thought-provoking point here is that Azerbaijan’s coefficient is actually negative, meaning that we are so unintegrated when it comes to Business Cycle Fluctuations that when the world economy is growing, we tend to shrink and vice versa.

On the spider chart below, you may see the results of the indexes drawn graphically. 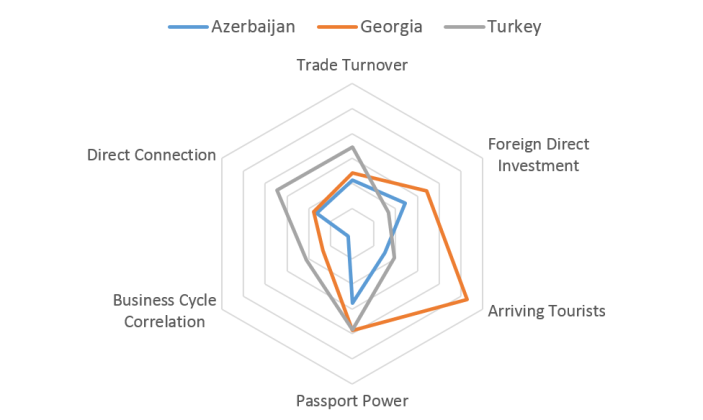 When it comes to economic factors, such as Foreign Trade and Business Cycle Correlation (excluding Foreign Direct Investment for the reasons outlined above) as well as direct air connections, Turkey is the leader. On the other hand, Georgia takes the lead on social and political dimensions, namely the Passport Power and Influx of Tourists[2].

It comes as a no surprise that Azerbaijan is not leading any of the five dimensions. Apart from inflow of FDI (likely due to abundance of natural resources), it ranks as the last in all indexes.

At this point, it is clear that Azerbaijan is not integrated into the World Economy and there is no visible effort towards this goal at the moment. While countries such as Turkey, Georgia, Armenia, Ukraine, Russia, Kazakhstan and many others have successfully become part of the WTO, Azerbaijan is still in the negotiation process, which is only 78 days younger than me (Azerbaijan started the negotiation process with WTO on 16 July 1997). When we look at the post-Soviet states, in most of the cases we see a clear pattern towards regional integration. Baltic states have long joined the European Union, Georgia and Ukraine are integrating into EU whilst Armenia, Belarus, Kazakhstan and Kyrgyzstan have joined the Russian dominated Eurasian Economic Union (EAEU). Tajikistan might be on the course of becoming the newest member of the EAEU in the near future. When we exclude the isolationist Turkmenistan, only two countries with no clear integration policy left behind are Uzbekistan and Azerbaijan.

The simple indicators that I have used in this paper, as well as other descriptive facts evidently demonstrates that Azerbaijan is far from integration at global or regional level. It is undeniable that integration is a vital element of the sustainable economic growth today. It allows resources to shift from less efficient parts of the economy to more productive sectors as well as lead to transfer of technology/knowledge. Economic interdependence that come with integration also reduces the likelihood of military conflicts. It is true that there are some disadvantages of this process as well, namely unemployment risk in the less efficient sectors of the economy, but soon or late it is a step that needs to be taken. At the end, enlarged trade and specialization would raise  the well-being of the society.

It is clear that the modern times require a more liberal economic policy, demonstrated by the success of India, China, South Korea and others who took a similar course. On the other side of the spectrum, there are isolationist countries, such as North Korea, Turkmenistan and Myanmar, who have a much worse living standards than the rest of the world. Considering all these, the foremost step that Azerbaijan needs to take is to facilitate the WTO negotiations and start an overall policy of gradually lessening trade restrictions. Playing a more active role in regional economic organizations can also prepare the economy and the society for a larger economic integration process in the future.

[1]Please be noted that I developed these 6 indexes for the purpose of comparing these three countries among themselves only. The criteria for first three indexes were determined by me in accordance with the performance of the countries. For example, in the case of Trade Turnover per person, “0” represents no trade at all while “1” represent trade turnover of 10,000 USD per person. On the other hand, the last three indexes, namely Passport Power, Connection and Business Cycle can be used to compare all other countries of the world.

[2] I reckon that Tourism is more of an economic factor than social/political. However, considering that the rise of tourism in Georgia was mainly boosted by its inclination towards Europe, its lead in this index can be labeled as a corollary of social/political policies.

2 thoughts on “How much is Azerbaijan integrated into the world?”