State Oil Fund of Azerbaijan (SOFAZ) without a doubt plays a major role in the national economy. Created in 2000, the Fund’s vital role in Azerbaijan motivated me to share my thoughts on the matter…

The importance of Sovereign Wealth Funds (SWFs) are undeniable. Countries typically establish them for a number of reasons, particularly: dividing the resource revenues proportionately among multiple generations, ensuring fiscal stability and preventing dependency of the economy on commodities. The revenue source for the SWFs varies, it can be commodity (oil and gas), non-commodity (currency reserves) or trade surplus[1].

SOFAZ was created in 2000. According to its charter, the Fund’s preeminent objectives are (a) collecting and efficiently utilizing oil/gas revenues, (b) intergenerational equity and (c) investing in projects that have strategic importance for Azerbaijan[2]. For that reason, it financed the Baku – Tbilisi – Kars railroad, scholarships for Azerbaijani citizens to study abroad, re-settlement of Internally Displaced Persons (IDPs) from Karabakh War, STAR Refinery in Turkey and etc.

Since the year of 2005 (the official reports for the earlier years are not published in oilfund.az) SOFAZ has had 133.1 billion USD worth of revenues. Of that amount, 99.8 billion (75% of revenues) were spent. In the year of 2015, the fund’s expenditures surpassed its revenues! From the graph below, you can see the timeline of SOFAZ’s revenues and expenditures in 2005 – 2017 period (the yearly report of 2018 is not published yet).

Graph 1: Timeline of expenditures and revenues of SOFAZ

In my opinion, the Fund’s spending policy can be divided into two broad periods: 2005 – 2011 and 2012 – present. The former period is characterized by greater accumulation, as 42.3% of revenues were saved on average in contrast with meager 7.9% of the latter period. It is evident that SOFAZ has ignored, particularly since 2012, the intergenerational equity by spending most of its income.

One may argue that the fund had no choice but to boost expenditures after 2012 with the purpose of saving the economy following the plunge of oil prices. Although this may be true, it is in direct violation of the fundamental idea that constitutes the base for SOFAZ’s existence: preventing dependency on oil sector. The argument is also invalid when we consider the Ratchet effect: once the government is spending more oil revenue during economic downturns, it is unlikely to decrease those expenditures when the recession ends. This trend effectively results in higher dependence of the economy on the oil sector.

Sovereign Wealth Funds’ foremost function is preventing the windfall resource revenues from directly entering into the national economy, which would otherwise lead to resource dependency. Therefore, the Funds accumulate these revenues and only invest in foreign shares/bonds with the intention of creating additional revenue. SOFAZ, on the other hand, fails to fulfill this task as well. At times, the share of transfers from the fund in overall state budget revenues was almost 60% (see Graph 2 below). Although that number declined to 35% by 2016, it has risen back to 42% in 2018. How can we talk about diversification from oil sector while the transfers from the Oil Fund alone constitute 42% of budget revenues?

Graph 2: Share of Transfers from SOFAZ in state budget revenues 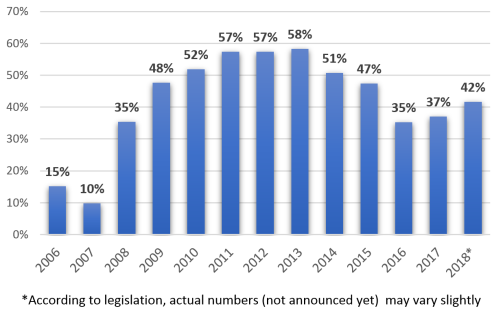 The overspending by the oil fund creates two major problems, oil dependency of the economy (as we discussed above) and unsustainability of the fiscal policy (which we will discuss below).

Although it is not included in its charter, the foremost objective of SOFAZ must be ensuring fiscal sustainability. This means that even when the oil/gas resources of Azerbaijan run out, the economy would not go under recession and the fiscal policy can be continued without tax hikes or cutting government expenditures. In my opinion, achieving fiscal sustainability is the point where the Fund fails the most miserably. Here is why;

After the amendments in July 2018, if we exclude the transfers from SOFAZ, the budget deficit of Azerbaijan stands at 10.2 billion manat. Considering that the reserves of the Fund are around 60.9 billion manat (2017), if for whatever reason, oil/gas production of Azerbaijan stops today, SOFAZ can keep the state budget afloat for only about 6 years. How the budget would be balanced after 6 years is a mystery. The situation in reality is even worse, because the non-oil budget deficit is larger (since the state budget also gets revenue from taxation of oil companies, which are not included in transfers). Too often the idea of depleting oil resources of Azerbaijan sounds like a distant phenomenon and we feel/act like oil/gas revenues are a never ending stream of revenue. Yet, that is not the case. According to a study by World Bank[3], Azerbaijan’s oil production will be halved by 2024 and these losses are not going to be compensated by growing gas extraction. The highly unsustainable fiscal policy of Azerbaijan must be re-designed over the course of next 5 – 10 years or we will face an economic catastrophe once the oil and gas resources run out.

A major part of re-designing our fiscal policy is related to SOFAZ. An adequate and functioning fiscal rule is needed in order to keep budget transfers within a certain limit. As a matter of fact, there is a fiscal rule currently “in place”. With a decree on September 2004, the president has signed “Long-term strategy on management of oil and gas revenues” into law, which covers 2005 – 2025 period and states that once revenues from oil/gas peaks, at least 25% of them must be saved in the following years. The strategy is unclear about peaking oil/gas revenues, but thus far 2011 recorded the highest revenues for SOFAZ. Considering the expected deterioration in oil production and drop in oil price, as well as the fact that only 6 years are left for the elapsing of the strategy period, it is safe to presume that 2011 is indeed the year where Azerbaijan’s oil/gas income peaked. Once we take 2011 as the peak year, all eight subsequent years fail to fulfil the requirement of the fiscal rule, including 2019 with a small margin of 0.05%. On Graph 3 below, you can see actual expenditures of SOFAZ in comparison with how its expenditures should have been if the 25% fiscal rule was followed.

Graph 3: SOFAZ’s actual revenues vs. how they should have been if the fiscal rule was followed

It is pitiful that thus far the long-term strategy has been completely ignored while managing the oil/gas revenues. Even successfully abiding the strategy would not ensure fiscal sustainability. 25% is, naturally, far from enough for this purpose. The best practice on this issue comes from the Sovereign Wealth Fund of Norway (Government Pension Fund Global (GPFG)), which is the largest SWF in the world with over a trillion USD worth of assets. As a prime example of achieving fiscal sustainability, it is pursuing the bird-in-hand approach, which states that the GPFG can only exploit the income which has been generated as a return upon investing the oil wealth. In other words, it actually does not spend the oil revenue at all!

Let us now compare that to indicators of SOFAZ. As a positive turn of events, the Fund has recently started to gain more from managing its assets. During 2017, it achieved 1.78% extra income by investing oil wealth in foreign stocks, bonds, real estate and etc. (see Table 1). If Azerbaijan wishes to achieve fiscal sustainability soon, then it must start the gradual shift to bird-in-hand approach, albeit such a shift is no easy task. For comparison, in 2017 the return on investment was 8.9% of the annual revenues. Meanwhile the expenditures of SOFAZ were equal to 90.76% (clearly violating even the 25% savings rule) of the annual revenues. Obviously, there is a colossal gap between the current state of SOFAZ’s expenditure policy and the bird-in-hand approach. However, it is not unachievable. Re-designing fiscal policy (fiscal consolidation) coupled with increasing return on investments due to accumulation of greater oil wealth and more experience can facilitate the process. The bird-in-hand approach is also desirable because unlike the oil revenues which are exceedingly volatile, the volatility of return on investments can be restrained by the investor (in this case, the SWF).

Table 1: Return on Investment of SOFAZ

There is one more elemental problem with SOFAZ, concerning its management style. Unlike most other SWFs of the world, the State Oil Fund of Azerbaijan is directly under control of the executive authority. As far as common sense goes, this is an undesirable situation and the Fund’s control must be within the competences of the parliament. Since the underlying reasons behind are more political than economic, I will not elaborate on them. Yet, Kanan Aslanli (2015) describes the problem in a very straightforward way;

“However, the political economy of power rivalry and elite struggles can create incentives for rapid overspending of natural resource revenues relative to the ideal levels of expenditure. These adverse effects are strongest when institutions and policies are otherwise weak, where political and economic power is highly concentrated, where transparency is comparatively limited, and where there are risks of rapid changes of government”

Before moving on to conclusion, I must also mention couple of positive things about SOFAZ. Firstly, the Fund ranks excellent on international standards when it comes to transparency. It has an easy to navigate website and shares its quarterly and annually budget reports in a coherent and accessible way. The Fund also shares the auditor’s opinion as well, which is something that most other State Institutions and State Owned Enterprises tend to ignore in Azerbaijan.

The State Oil Fund of Azerbaijan is perhaps the most influential actor for combatting Azerbaijan’s dependence on oil/gas sector. It also bears the responsibility of safeguarding the oil wealth for the future generations. However, the Fund’s activities following its establishment, particularly since the year of 2012 are not aimed either at intergenerational equity or diversification of the economy. It has undermined its functions by spending majority of the oil revenues, particularly in the form of transfers to the state budget. As a result, the state budget is densely dependent on oil/gas sector, with more than 40% being financed by direct transfers of SOFAZ. Considering the expected downturn in oil production, Azerbaijan’s fiscal policy remains highly unsustainable, which could turn into an economic disaster if not addressed on time.

It is crystal clear that Azerbaijan is in desperate need of a functioning fiscal rule unlike the “Long-term strategy on management of oil and gas revenues”. The Fund should start the gradual shift towards bird-in-approach where only the revenue generated from management of oil/gas wealth can be utilized. Such a shift would allow the fund to accumulate more wealth for future generations and at the same time generate higher investment revenues. In order to ensure swift transition to bird-in-hand approach over the course of next 10 – 15 years, policy of fiscal consolidation must be pursued.

SOME GOOD READS ON THE SUBJECT

[1] For more information on SWFs you can visit https://www.swfinstitute.org

[4] The indicator is calculated by dividing the Revenue from Investments to Total Assets of SOFAZ at the given year.

4 thoughts on “State Oil Fund of Azerbaijan – A Disoriented SWF”